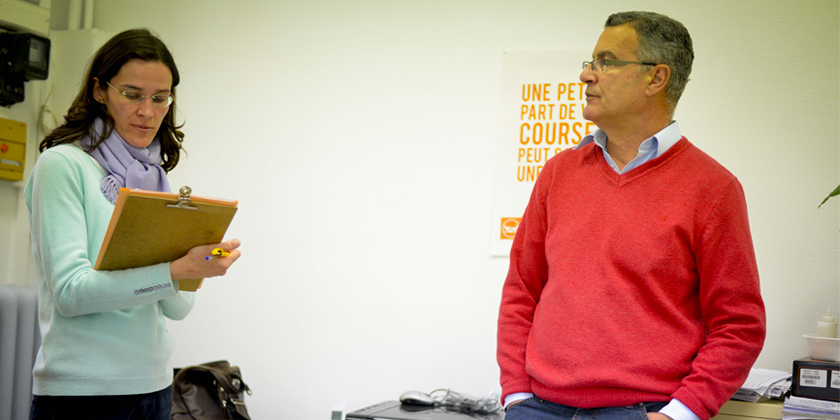 In January 2015 I arrived in Paris for a three-month sabbatical.

I am a psychology professor at the University of Virginia.

Five years ago my wife and I bought an apartment in Paris, in the fifteenth arrondissement close to the Eiffel Tower.  Although this was a working sabbatical, I had some other goals as well.  My wife speaks French fluently, while I have spent years trying to maintain my college level French.  Also, as a long-time Francophile I wanted to use the opportunity I had been granted to give a little something back to the city I love.  So I decided to seek an opportunity be a volunteer, a bénévolat.

It is not easy for an American in Paris for a short while to find a good opportunity to volunteer.  The arrondissements of the city maintain volunteer websites, but they are in French (unsurprisingly) and mostly oriented toward people who want to take a volunteer job for a long period of time.  The second Saturday I was here, however, a group of people was out in front of our neighborhood supermarket, collecting food donations.  I was too shy about my French to talk to them, so I jotted down a website written on a sign behind their table for an agency called Le Relais Frémicourt.  I went to the site, found an email address and wrote them.

Several days later I received a phone call from M. Lanternier, the director, inviting me to stop by Saturday morning to get oriented.  The phone call itself was a bit of a victory for me.  Those of you who have tried to learn a foreign language know that talking on the phone is particularly difficult, especially when you don’t know who is calling or what it is about.  But I managed, and got the information I needed.

The Relais Frémicourt is a couple of metro stops away from where I live, so it was easy to get there.  When I arrived and found M. Lanternier he showed me around and told me how the Relais worked.  Mostly, it serves as a food bank for needy individuals who come there to pick up food.  Some clients, however, are unable to come to the Relais, so on Saturday volunteers take food to them.  That was going to be my job.  My client, Monsieur G, was facing particularly difficult circumstances.  Recently unemployed, he had a daughter who had suffered brain damage from meningitis and had difficulty walking.  He had no source of income and multiple dependents.

I had been told to bring my chariot, a rolling grocery cart.  M. Lanternier showed me how to fill it up with the food Monsieur G. might need:  beans and lentils, fresh vegetables, staples like flour and sugar, butter, sweets, and frozen meat and fish.  Like Monsieur G, many of the clients are Muslims who do not eat pork or drink alcohol.  Once my chariot was full I headed off to find Monsieur G’s apartment.  It turned out to be quite a long walk to the other side of the arrondissement, in a large apartment complex that seemed to me to be lower middle class, but not at all decrepit.  I had to figure out how to get through the gate on the street, find the correct building among the half-dozen in the complex, and locate Monsieur G’s number by the doorbell.  He buzzed me in and I lugged the chariot up a flight of stairs.

Monsieur G’s native language is Arabic, his French is about as good (or not so good) as mine, so we had a little trouble communicating.  He was very interested in why an American would have turned up at his doorstep.  He told me about some relatives he has in the United States.  And he told me his story of unemployment and his daughter’s illness.  It was very moving.  He said he is a vegetarian and declined all the meat and fish, although to this day I am uncertain if he is actually vegetarian, or just not confident that the meat I bring is Halal.  He was very grateful for the food and my (so small, really) effort.  He hugged me as I left, with tears in his eyes.

I had called ahead to let Monsieur G know I was coming, and during the week he texted me a couple of times to make sure I was coming back and let me know what he needed.  It was occasionally a bit difficult, because he wanted some things like chickpeas and olive oil that the Relais didn’t usually have around.  I had been asked not to freelance on food donations, so I just had to explain that they weren’t available.  And for the next five or six weeks, every Saturday I would fill up my cart and go see him.  Finally, two weeks ago, the Relais let me know that it was time for Monsieur G to start coming to the Relais on his own.  I thought he was going to be disappointed, but he took the news well, and we said our farewells.

All in all, my time with the Relais Frémicourt was one of the most satisfying things I did during my time in Paris.  M. Lanternier, his staff and the other volunteers were all very kind to me, and patient with my poor French.  I encourage other American expats to take the time to find a volunteer opportunity while you are in France.  It feels good to give back to the culture that is taking such good care of you.  In addition, the best way to learn French, better than any class, is to spend time talking to actual French people.

I am very grateful to everyone at Relais Frémicourt, and to Monsieur G, for the wonderful experience I had.